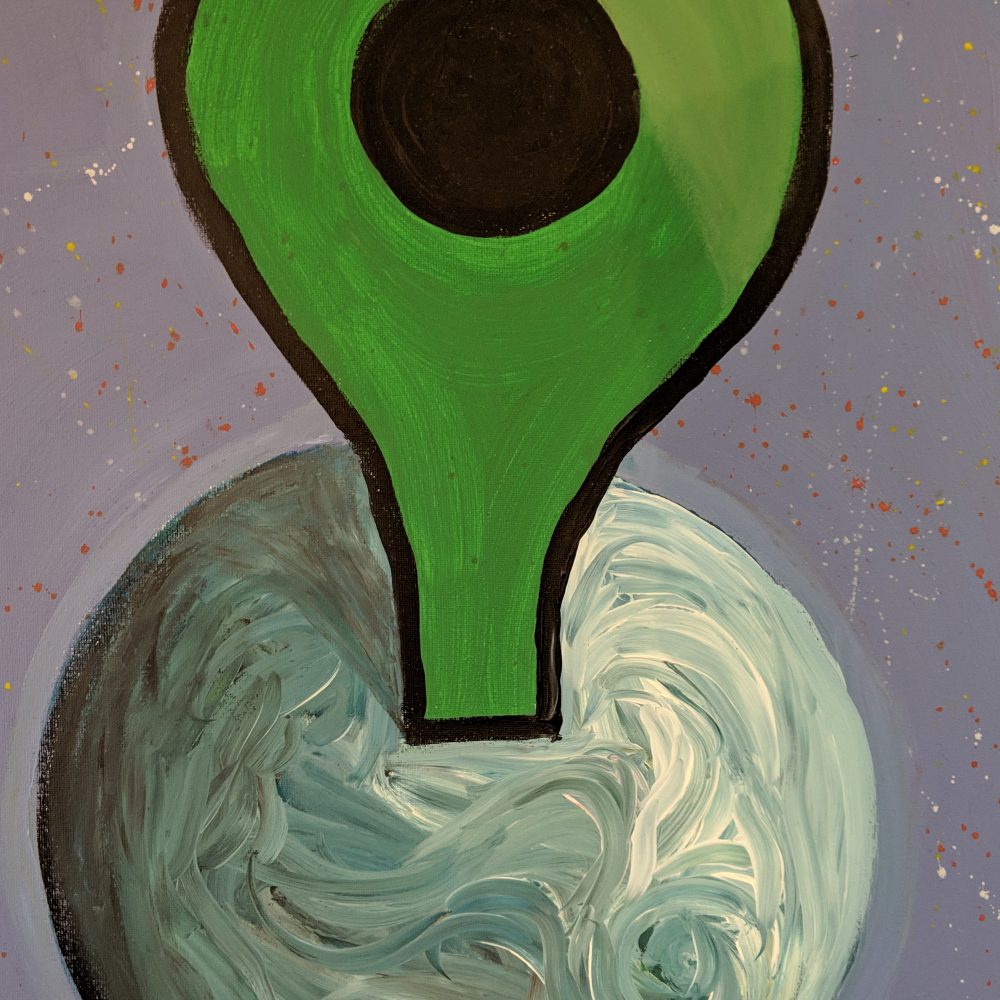 We are here original picture

Everybody know this little pin on a map, on several online map services. This is very useful for get where you are currently, or where is a place, a point. This painting represent just an extruded point of view, on a different scale, that’s all.
Enjoy it!

Read the concept if you want to understand this section.

Radu come from the Moldovan city of Chișinău

On the picture, Radu wear a T-shirt size M, a little bit too large for him, I have to confess!

– Was it your first time in Paris?
yes, first time
– What did you like in France?
In france I liked the nature, meaning that there is vegetation in the city. and the diversity of nations.
one day, many years ago I had this dream, “I wish to see Babylon one”, meaning that I wanted to see humanity reunite. and I think I see the beginning of that process now.
– If you should share your favorite spot in Paris, witch one would you like to share?
My best spot in paris would be the hight hill from where you see all the city, Montmartre, where we have been together.
– Can you tell us some words from where you are?
I am from Moldova, which is a former republic of the soviet union. our republic was the garden of the USSR. having the best soils, we were growing food and producing wine for the entire union!
back then, and some of that is still left in people of my generation, people were brothers, and used to address each other as comrads. we had an ideology that we are all one, and all brothers. and I think I see the beginning of the same good ideology now in Europe.
Moldova is a very small but beautiful country, called the second Switzerland, for the vegetation, many small waterfalls in the woods.
our capital, Chisinau, has 22 parks of different sizes, and 7 lakes (but you cannot swim in them).
we have a cool beautiful country, which is being exploited by the ruling class, and this is happening all over the world, in any country. this is a characteristic of our civilization.
what was your best experience in paris?
my best experience in paris was hitchhiking from paris Beauvais to paris, offered a ride by a black guy from Angola, who happened to be a lot like myself.
And taking a walk from rue des maraîchers to porte d’Italie, and then another 2 hours to the direction of the Orly airport, and eventually I walked to the exit to the A6 highway, and this was the best walk in the past years. the last best one like that was last year in Ukrainan mountains, a 30km trail hike through blackberry fields.

Picture have been take in front of La Villette. You can see behind a sphere, inside wich you have a spherical film theatre.
In this park, in the northern top of Paris, you can also see the science museum of Paris.

There are no reviews yet.

Be the first to review “We are here” Cancel reply